When you eat a piece of chocolate, what do you think about?

How it tastes...the aromas...the texture as it melts in your mouth? Probably.

But do you ever think about the incredible journey it’s been on to get there? Where it’s come from? The Origin. Probably not.

But you should. Because believe it or not, you can taste it...

Most people grow up thinking of chocolate as simply a confectionery treat, but there’s so much more to it than that! There’s a whole world of possibility out there, and for bean-to-bar chocolate-makers, it all stems from the miraculous properties and incredible potential of the cocoa bean. The only question is, whether we are able to harness that potential - from bean, to bar.

To answer that question we need to begin at the beginning - in the lower storey of the evergreen rainforest, the natural habitat of the cocoa tree…

You may not know that cocoa beans are actually seeds that grow inside cocoa pods, the fruit of the cocoa tree, also known as Theobroma Cacao. 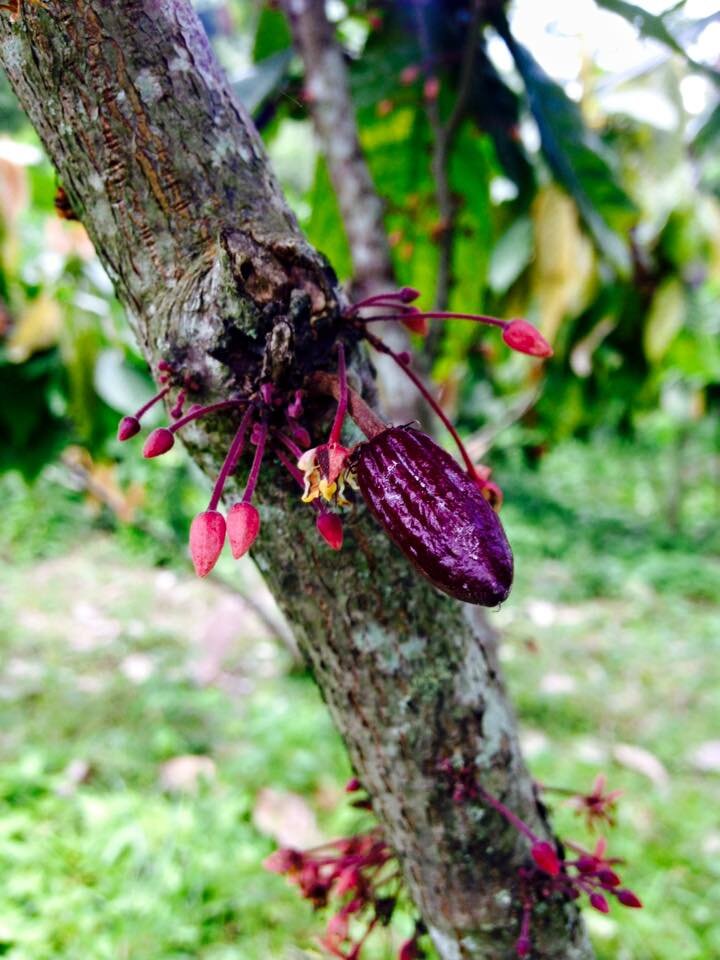 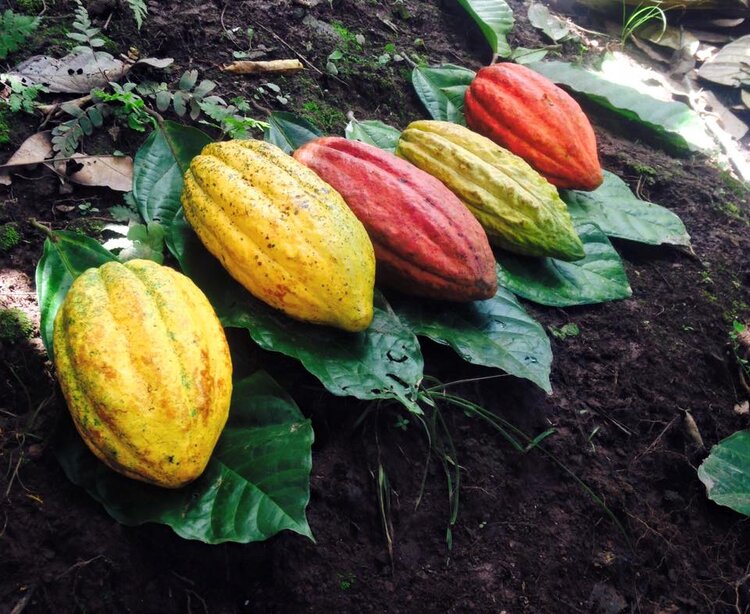 Depending on the variety, cocoa pods come in a whole range of vibrant colours - greens, reds, oranges and purples. Inside each cocoa pod is an edible, fleshy pulp holding 30-50 seeds. And it is from these seeds that we make chocolate. Roughly speaking, two pods will hold enough beans to make a single bar of 80% chocolate. 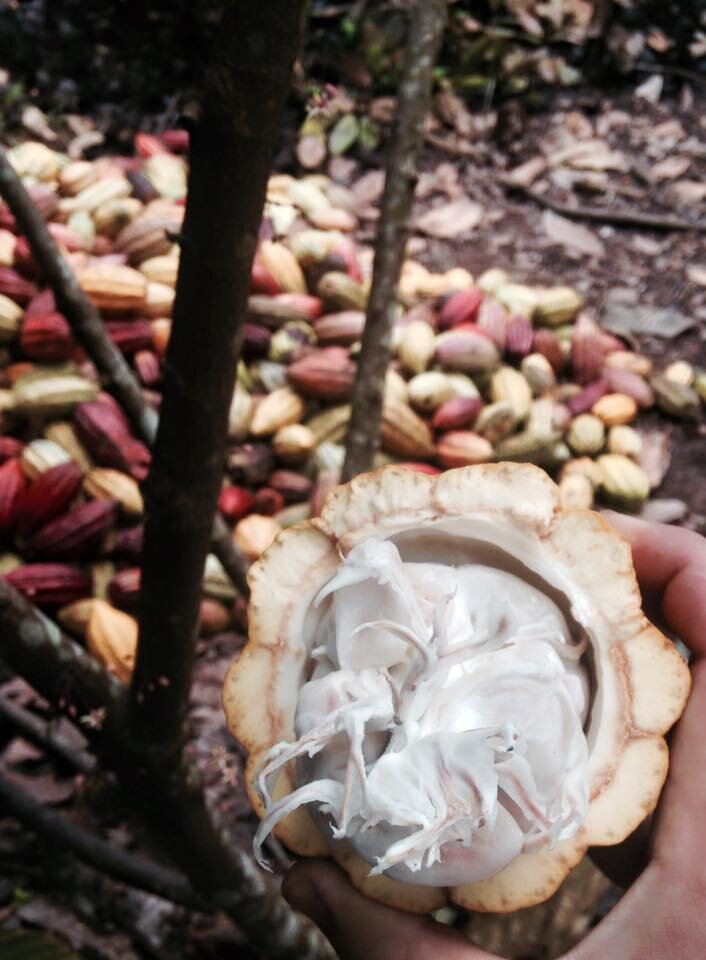 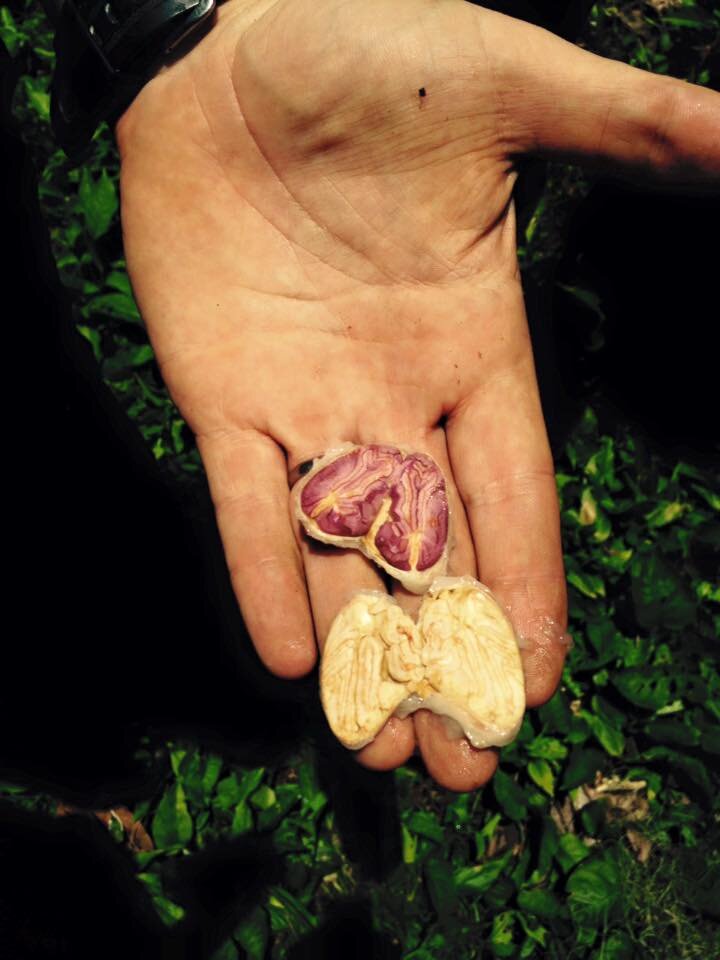 Cocoa trees are usually found in countries that lie (relatively) near to the Equator - in a belt around the Earth that provides the perfect conditions for them to thrive. From the Philippines to Peru, from Nicaragua to Madagascar - these countries share similarities in terms of their climate, but the cocoa they produce can be worlds apart.

When we talk about “quality cocoa” what we really mean is that it has excellent flavour potential. We could go into a lot of depth about these things, and every chocolate maker has their own version of what defines “quality”. Here at Land, we look at three main factors that determine quality for us: Genetics (type of cocoa), terroir and fermentation.

Our understanding of the genetic varieties of cocoa is changing. Generally speaking, there are three main types - Criollo, Forastero and Trinitario.

Trinitario is actually a hybrid of Forastero and Criollo, developed on the island of Trinidad back in the 1700’s.

We used to think these were the only varieties in the world. But in the last two decades, we have started to discover new ones, such as Amelonado, traces of which can be found in our own Nicaraguan chocolate.

The discovery of new varieties of cocoa is an exciting prospect for chocolate makers and chocolate lovers. For now though, let’s stick to the three main types:

Though there are exceptions, Forastero is linked to “bulk” or “ordinary” cocoa, accounting for around 95% of the world’s cocoa production.

The remainder (around 5%) is considered “fine or flavour” cocoa, which is usually associated with Criollo and Trinitario varieties.

As the name suggests, “fine or flavour” cocoa is what we’re after.

Wine enthusiasts talk about the importance of terroir - the complete natural environment in which the grapes are produced - the soil, topography, climate etc. The same is true of cocoa beans. 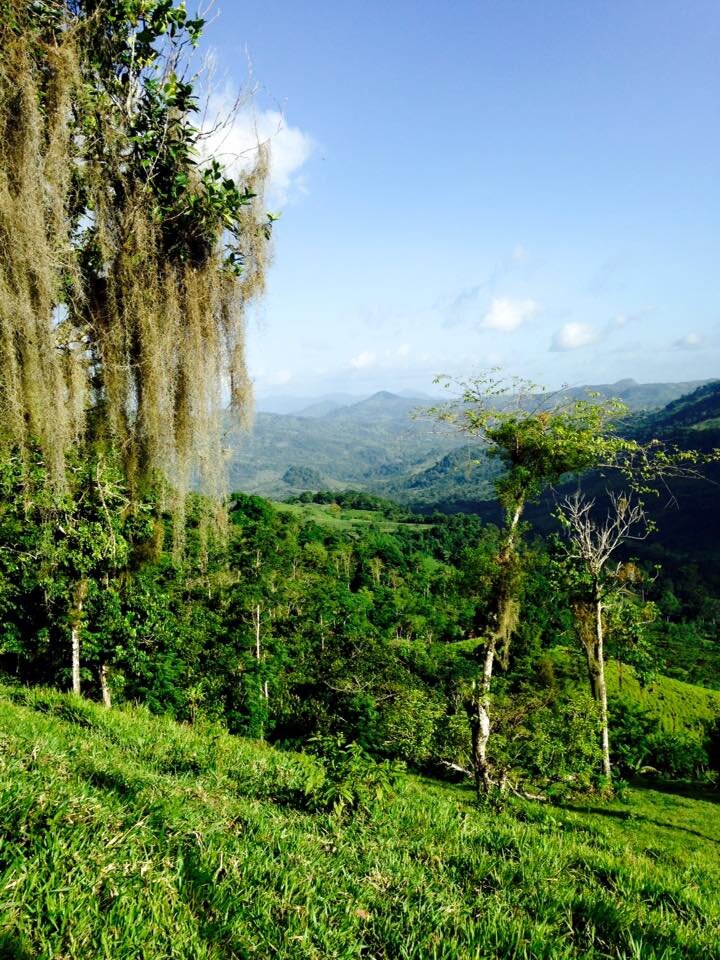 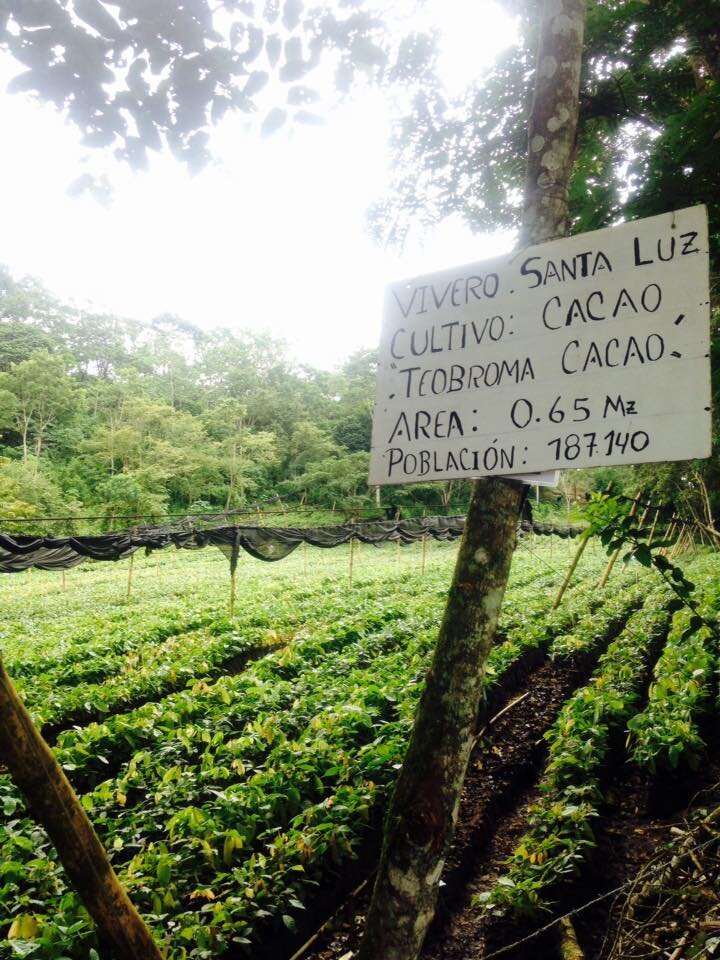 Think of the varieties available to you when you buy a bottle of wine - the variety of grapes, regions, chateaus, vintages etc. All of these factors can produce something that tastes very different.

Again, the same is true of cocoa, but here’s the difference - a cocoa bean has just as much (if not more) flavour potential than a wine grape. In fact, there are over 400 flavour compounds that can occur naturally within it.

But these crucial flavour compounds need to be developed - that’s why the next process is just as important when it comes to assessing the quality of the cocoa...

Once the cocoa pod is ripe, it’s then harvested. Farmers crack open the pods, extracting the white pulp and cocoa beans which are then placed into wooden boxes where they can ferment. The harvested beans sit in the boxes for anywhere between 3-7 days. 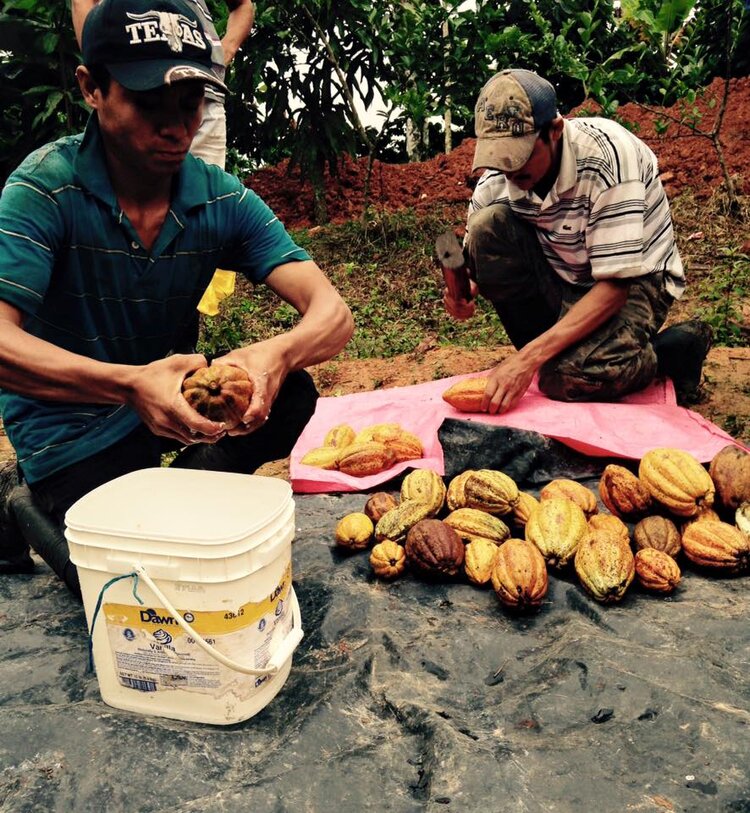 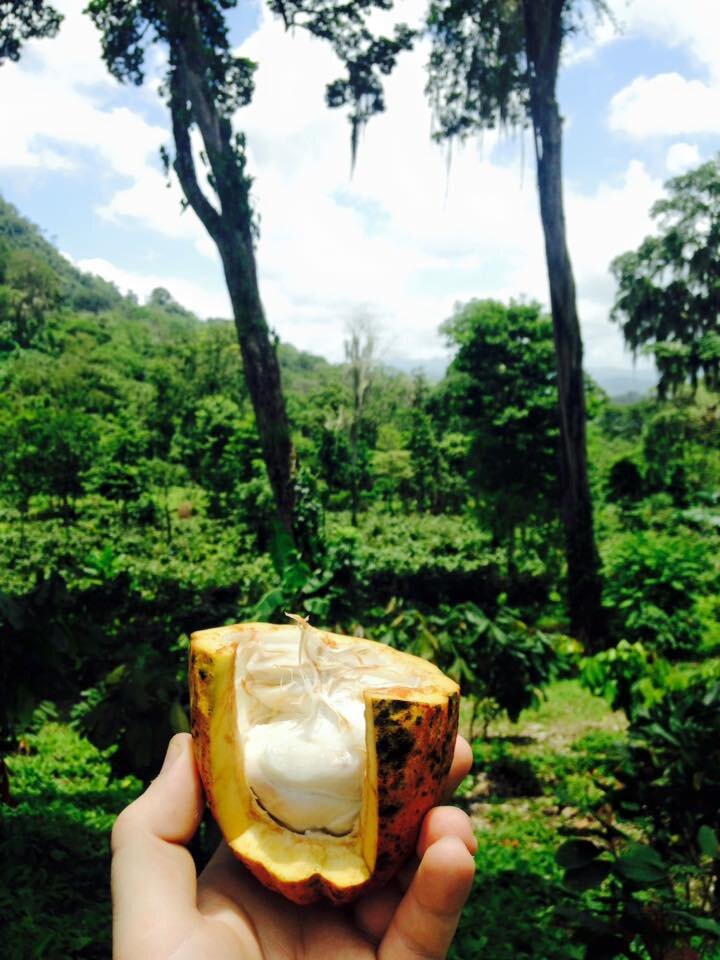 During that time, yeasts develop and start to react with the sugars in the pulp. The sugars turn into acids which then react with the compounds living in the beans. These chemical reactions develop the pre-cursors of flavour that we can use to make our chocolate.

After fermentation, the beans are laid out on the ground to dry in the sun. This can take up to a week, or longer, depending on the weather conditions. It may sound like a simple step but it requires a great deal of care and attention, otherwise moulds and off-flavours can start to develop in the beans. Drying also stops the fermentation process and reduces the moisture content of the beans to around 5-8%.

They are now ready to be shipped off to a chocolate maker…like us:

It’s our job as chocolate makers to bring out or highlight the flavours that have been carefully developed by the farmers. We do this by tweaking each of our processes to nurture the flavour potential of the beans.

That’s why, for us, the type of cocoa beans we use are incredibly important because when you do take a piece of bean-to-bar chocolate and put it in your mouth, what you’re really tasting, in a sense, is where it came from.

So now you know the importance of starting with a quality ingredient, we can begin the process of making our chocolate. Remember, each step in the making process is an opportunity for us to create something new - with a tweak here, an adjustment there. Imagine having the same variety and quality of choice with your chocolate as you do with your wine. That’s what we’re aiming for.

So let’s continue our journey and learn how to make chocolate the bean-to-bar way.

WANT TO STAY IN TOUCH?